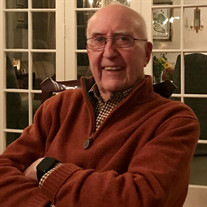 Paul Jules Hausmann of Gladwyne, Pennsylvania (and most recently Champaign, Illinois) passed away on January 8th. He is survived by his loving wife of 56 years (and “steady” of 60 years) Marjorie Fisher Hausmann, along with his three siblings and their spouses: Nancy Hausmann Cody (Bill); Peter Hausmann (Alice); and John Hausmann (Sue). The extraordinary personal attributes and characteristics that distinguished Paul’s 80 years—a hearty and infectious laugh; an ever-present smile; an easy ability to make and keep friends; a positive spirit; a broad perspective and open mind; an aptitude for the analytical as well as the mechanical; a devout faith; and an enormous capacity to bring and take joy from each and every day—have been parsed through the gift of the gene pool to his five children and ten grandchildren. He is survived by all of his children: Ann Hausmann (Jonathan Alderson); Paul Hausmann (Tara Powers-Hausmann); Tom Hausmann (Jennifer Fox); Jim Hausmann (Maureen); and Elizabeth Hausmann, along with their children: Hudson Hausmann, Julian Alderson, Erin Hausmann, Henry Hausmann, Samuel Alderson, Jimmy Hausmann, Giselle Hausmann, Will Hausmann, Michael Hausmann, and Tommy Hausmann. Born to parents of German and Irish immigrant families—Otto Julius Hausmann and Rita Hourigan Hausmann—Paul grew up initially in Weehawken, New Jersey in a neighborhood overlooking the Hudson River. He attended Stevens Institute of Technology and Harvard Business School’s Advanced Management Program and spent his career in the forging industry—primarily with Wyman-Gordon Company, where he rose to the position of Vice President-General Manager, and Clifford-Jacobs Forging, where he served as President and Chairman and was responsible for transitioning the company from a private family holding to a public company. He was elected by his peers to a term as President of the Forging Industry Association and served additionally on hospital, school, and church boards. He loved to golf and bicycle. Paul’s ascendency through Wyman-Gordon Company, which he joined as a college graduate, moved him and his family across the country over a 25-year period—from Worcester, Massachusetts to Cypress, California; Flossmoor, Illinois; Jackson, Michigan; and back to Worcester. But he and Marj spent the last 20 years of Paul’s life, during which he retired from Clifford-Jacobs Forging, in Champaign, Illinois—including summers on Cape Cod in Massachusetts. In September, they relocated to Waverly Heights in Gladwyne, Pennsylvania. Paul’s passing leaves a huge hole in the hearts of his family and friends. The family will receive guests at Chadwick & McKinney Funeral Home (30 East Athens Avenue, Ardmore, Pennsylvania) on Friday, January 11, 2019 from 3 PM to 5 PM. A funeral Mass in celebration of Paul’s life will take place at St. John Vianney Church (350 Conshohocken State Road, Gladwyne, Pennsylvania) on Saturday, January 12, 2019 at 11 AM. In lieu of flowers, the family asks that contributions be made to either: The Margaret F. McKeel Family Educational Endowment Fund at the Waverly Heights Foundation, which provides financial support for staff pursuing their Registered Nurse license (Waverly Heights Foundation, 1400 Waverly Road, Gladwyne, PA 19035) or Natural Lands, the region’s oldest and largest conservation organization (1031 Palmers Mill Road, Media, PA 19063).

Paul Jules Hausmann of Gladwyne, Pennsylvania (and most recently Champaign, Illinois) passed away on January 8th. He is survived by his loving wife of 56 years (and &#8220;steady&#8221; of 60 years) Marjorie Fisher Hausmann, along with his three... View Obituary & Service Information

The family of Paul J. Hausmann created this Life Tributes page to make it easy to share your memories.

Paul Jules Hausmann of Gladwyne, Pennsylvania (and most recently...

Send flowers to the Hausmann family.