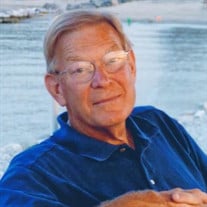 Peter F. Waitneight, 79, of West Chester, PA died peacefully on Thursday, October 14, 2021, with his beloved wife Lisa by his side. Born in Philadelphia in 1942, Peter lived most of his life in Pennsylvania where his family has a long history stretching back eight generations. The last 38 years of his life were spent in Chester County where he and Lisa raised their family, collected antiques, enjoyed fox hunting and boating, and made lifelong friends. The greatest joy of his life was his family. In addition to his wife Lisa of 56 years, Peter is survived by his three children and their spouses: Jennifer Leibowitz (Andy) of Wayne, PA, Elizabeth Mancini (Scott) of Wake Forest, NC, and Jonathan Waitneight (Jean) of Westborough, MA. He cherished his six grandchildren: Nathan and Jacob Leibowitz, Ethan and Amelia Mancini, and Sawyer and Cooper Waitneight. Peter is also survived by his brothers Richard Waitneight (Sandy) of Newport Beach, CA and Stephen Waitneight (Casey) of Orleans, MA and St. Augustine, FL. He will be missed by his brothers-in-law, sisters-in-law, nephews and niece. He was preceded in death by his parents James G. and Fanny M. Waitneight. Peter was a graduate of Harriton High School (class of 1960), Princeton University (class of 1964), and received his M.B.A from the Wharton School of the University of Pennsylvania (1966). During his senior year at Princeton, Peter met Elizabeth “Lisa” Wiley and she was the love of his life ever since. While at Princeton, Peter was Vice President of Charter Club. He participated in the Army ROTC program and was commissioned a Second Lieutenant of Artillery. He served from 1964 to 1969, spending a year in Korea reaching the rank of First Lieutenant and was awarded the Army Commendation Medal. Following Wharton, Peter began a long and distinguished career in finance with Sun Oil Company (Sunoco). He held many leadership roles over his 26-year career with Sunoco which included a seven-year tenure in Dallas, TX. After relocating back to Philadelphia, Peter was named CFO of Sunoco’s Refining and Marketing division. Later, he was promoted to Treasurer of the parent company. Following his retirement from Sunoco in 1992, Peter reinvented himself as a finance consultant. Among other accomplishments, he led the SEC registration and successful launch of a family of mutual funds. Peter served on the Board of Radnor Hunt and as President in the 1990s. He served as a board member of the Chester County Community Foundation in West Chester, PA and Historic Sugartown in Malvern, PA. For all who knew him, Peter’s brilliant mind and dry wit left an indelible impression. Despite his impressive achievements, Peter was a humble man who deeply enjoyed the simple things. For his 50th Princeton reunion yearbook in 2014, Peter outlined his bucket list. It read, “No skydiving or bungee jumping and no exotic trips. I want to be with Lisa to enjoy each member of my family. I want to see the grandkids progress through their educations and make life decisions with the loving support of their parents. Oh, and maybe catch a few more trout”. At Peter’s request, there will be no funeral service. A private celebration of life will be scheduled for which family and friends will be notified. In lieu of flowers, contributions in Peter’s memory may be made to “The Fund for Women and Girls: Igniting Change in Chester County” https://www.thefundcc.org/ or Juvenile Diabetes Research Foundation (JDRF) https://www.jdrf.org/donate/

Peter F. Waitneight, 79, of West Chester, PA died peacefully on Thursday, October 14, 2021, with his beloved wife Lisa by his side. Born in Philadelphia in 1942, Peter lived most of his life in Pennsylvania where his family has a long history... View Obituary & Service Information

The family of Peter F. Waitneight created this Life Tributes page to make it easy to share your memories.

Send flowers to the Waitneight family.