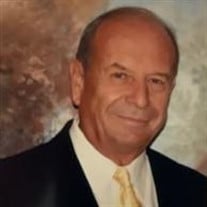 R. Chase McDaniel II, 89, beloved husband, father, uncle and friend passed away February 22, 2022. Chase was born October 25, 1932 in Philadelphia to Delaplaine and Charlotte (Wilkinson) McDaniel. He graduated from the Germantown Friends School in 1950 and from the Wharton School at the University of Pennsylvania in 1954. It was at Penn where he met his wife of 48 years, Barbara Santora, whom he married shortly after graduation. Together they lived in Florida and Maryland and became avid sailors while he served in the Air Force until 1958, reaching the rank of Captain. They returned to Philadelphia where Chase worked for Blyth Eastman Dillion for over twenty years and subsequently Drexel Burnham Lambert prior to joining his father in the commercial real estate business. Learning from his father’s experience with the Plymouth Meeting and the Oxford Valley Malls, Chase distinguished himself with the Baederwood Shopping Center in Jenkintown. Chase’s bias for dedication and hard work carried into his passion for sports year-round. As a member of the Merion Cricket Club, he was an avid tennis and squash player, which he played consistently including the day he died. He and his family spent each summer at the Pocono Lake Preserve where he was an enthusiastic sailor by day and fisherman well into the evening. Over time, after the passing of his wife Barbara, Chase reengaged with his joy of skiing and became a member of the Main Line Ski Club where he met and married his second wife Susan Goelz. Together they traveled the world fulfilling their interest and desire for adventure. Chase and his siblings, Delaplaine and Nancy, McDaniel supported family traditions. Chase and his brother were actively engaged in figure skating as skaters and as international figure skating judges. Chase and his sister continued sponsorship of the Delaplaine McDaniel Elementary School in Philadelphia through outreach and funding to support the arts and specifically music and theater. Chase and Susan were also annual supporters of the Philly Pops. Chase is predeceased by his brother and sister; survived by his wife Susan; his three children, Elizabeth, Chase and Sarah; his two granddaughters, Caroline and Brooke; and three nieces and a nephew. Funeral services will be conducted at the Washington Memorial Chapel in Valley Forge on Tuesday, March 1, beginning at 11:00 AM. In lieu of flowers, contributions can be made to The Washington Memorial Chapel.

The family of R. Chase McDaniel II created this Life Tributes page to make it easy to share your memories.

Send flowers to the McDaniel family.