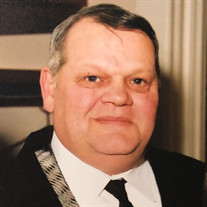 Raymond Clayton Brightbill Jr. of Darby, PA, died on May 7th., 2021 at the age of 75. He was born on November 9th., 1945 in Pottstown, PA to the late Raymond Brightbill and Beatrice Schutt. After graduating from high school, he was a longtime Pipefitter for Sun Ship, Philadelphia Navy Yard, and Aker Philadelphia Shipyard. He retired from Aker Philadelphia Shipyard in 2012. He served for 3 years in the US Army both in Korea and Vietnam and was awarded a Combat Infantry Badge and Vietnam Service Medal. Ray was first and foremost a family man who enjoyed serving as a little league baseball and soccer coach for his son’s teams and watching his grandchildren play sports. Known also as a hard worker, good neighbor, and friend, Ray would spend afternoons mowing lawns for neighbors after completing the night shift at the ship yard. He also enjoyed playing pinnacle, Skip-Bo, and Gin Rummy with family and friends. Ray was also an outdoorsman who enjoyed hunting and helping maintain the family’s cabin and property in the mountains of central Pennsylvania. He also looked forward to summer vacations with the family in Stone Harbor, New Jersey where he would spend hours fishing. He loved and adored all animals, but his favorites were his three grandpups Piper, Sophie, and Cocoa. He is survived by his wife of almost 51 years Lynda Brightbill (nee Good); sons, David Brightbill (Carolyn), and Kenneth Brightbill (Diane); preceded in death by his infant daughter, Jennifer Brightbill; and also survived by grandchildren, Skylar, Maya, Isabella, Peyton and Evan; Brother and sisters-in-law – William Good (Ann) and Debbie Good. The family will receive guests from 10AM to 11AM on Tues. May 11th in the Chadwick & McKinney Funeral Home, 30 E. Athens Ave., Ardmore, PA (Please wear a mask and adhere to social distancing) His funeral service will be private. In lieu of flowers, contributions may be made to The American Heart Assn., 1617 John F Kennedy Blvd # 700, Philadelphia, PA 19103

Raymond Clayton Brightbill Jr. of Darby, PA, died on May 7th., 2021 at the age of 75. He was born on November 9th., 1945 in Pottstown, PA to the late Raymond Brightbill and Beatrice Schutt. After graduating from high school, he was a longtime... View Obituary & Service Information

The family of Raymond C. Brightbill created this Life Tributes page to make it easy to share your memories.

Send flowers to the Brightbill family.