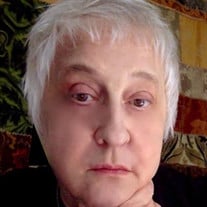 Tree Riesener Tree Riesener (married name Rebecca Rice Lemaitre, née Milligan) of Bryn Mawr, PA, died peacefully, at home, on March 5, 2022. Tree was the beloved wife of Guy H. Lemaitre. Devoted mother of Corene H. Lemaitre and Guy T. Lemaitre. Loving sister of Melissa Clark and the late Caroline Bobik. Tree was born on February 24, 1943, in Crooksville, Ohio, to Corene and Chalmer Milligan. She graduated from Crooksville High School as Valedictorian. At the University of Pittsburgh, she earned a BA in English Literature. While studying, Tree supported both herself and her parents, working in an RCA radio factory, a legal proofreading department, and the children’s section of the Carnegie Library of Pittsburgh. Tree and Guy met as students. They shared many wonderful experiences, including hitchhiking to Cape Cod and dancing to the Platters. In 1966, they married. Later, they settled in Wayne, PA. However busy, Tree made time for her children. She would create magical birthday parties and holidays. Whether reading to them, attending school and other events, or encouraging them to follow their dreams, she was always there. Tree would celebrate her family’s achievements in the most beautiful ways. One source of joy was her husband, Guy’s, career in the performing arts as singer, actor, voiceover artist and comedian. She took great pride in his accomplishments, and he in hers. Guy would play his guitar and sing to her, which she loved. Tree was a widely published poet and writer. Tree’s collection of short stories, Sleepers Awake, won the Eludia Award from Hidden River Arts. Described by Jacob M. Appel as “a wry, mordant and insightful examination of what faith means in an increasingly secular, doubting society,” Sleepers Awake was published by Sowilo Press in 2015. Other recognitions included the William Van Wert Memorial Fiction Award, three first prizes for fiction at the Philadelphia Writers Conference, and a Hawthornden Fellowship to attend the Hawthornden Castle Literary Retreat in Scotland. Tree wrote a number of poetry collections: Quodlibet (Ravenna Press, 2020), inspired by the “quodlibetal” debates held at medieval universities. Neil Aitken wrote: “As John Donne before her, Riesener writes the sublime unflinchingly and convincingly, laying bare a passion that plays out blood, angels, and an unforgettable liturgy of loss.” EK (Červená Barva Press, 2017), ekphrastic poetry, described by Laurie Byro as “a tour-de-force of intellectual responses to art of all varieties.” John Sweet wrote: “In this new collection, Riesener’s ‘poems of witness’ move into powerful, unexplored worlds of language. What strikes me the most? The vitality and freshness of her work - the beautiful side by side with the ugly and the sacred with the profane.” Angel Fever/Triple No. 5 (Ravenna Press, 2017), poetry of the celestial. The Hubble Cantos (Aldrich Press, 2016), astronomical poetry, described by Robert Zaller as “a sustained meditation on the cosmos.” In the Philadelphia Inquirer, John Timpane wrote: “This book is a Nantucket sleigh ride through the universe. Ambitious, funny, fearless, The Hubble Cantos shows us why we need poetry as well as science.” Inscapes (Finishing Line Press, 2008), poems of interior landscapes. Rane Arroyo wrote: “This is a book of mysteries: cosmic chartings, how desire wears many masks, and how light reveals the world to us, detail after detail. Here is a poet with a brave eye and even a braver heart.” Angel Poison (Pudding House Publications, 2007), views on contemporary life. Liminalog (Asylum Press, 2005), a collection of ghazals and sijo - ancient forms from Persia and Korea. Dr Gene Doty wrote: “Some of Riesener’s strongest poems explore life in the body. What is the DNA of the apple in Eden? What do nuns get up to on the Internet?” Tree’s work appeared in many literary magazines and anthologies. Tree had three short stories staged in the Writing Aloud series of InterAct Theatre, Philadelphia. Tree was Managing Editor of the Schuylkill Valley Journal and Contributing Editor to the Ghazal Page. Possessed of keen observational skills and a fine wit, Tree wrote a humor column for the Suburban and Wayne Times called “The Voice of Sweet Riesen.” Tree was a dedicated teacher, held in deep affection by her students. Funded by a grant from the Ellis Foundation, Tree created the Saturday Program, an innovative project that used filmmaking as a learning tool for underprivileged young people from Philadelphia. Tree was Director of the English Language Academy at Harcum College, and co-founder and Director of the Intensive English Language Program (IELP) at Temple University. She established the IELP at Temple University’s campus in Tokyo, Japan, and traveled to China at the invitation of Nankai University, to advise on teacher recruitment. Tree’s interests were many, and included literature, history, and human rights. She was a member of the Brontë Society, the Richard III Society, and Amnesty International. Tree worshipped at St Mary’s Episcopal in Wayne, PA, where she launched a Shakespeare reading group, volunteered at the thrift shop, and prepared baked treats for Winter Shelter. Tree later joined the Church of the Good Shepherd in Bryn Mawr, PA, where she found great peace and solace. At Tree’s request, there will be no funeral or memorial service. Donations may be sent to: Church of the Good Shepherd, 1116 W. Lancaster Avenue, Bryn Mawr, PA 19010, in Tree’s memory. www.goodshepherdrosemont.com

The family of Rebecca "Tree Riesener" Lemaitre created this Life Tributes page to make it easy to share your memories.

Send flowers to the Lemaitre family.