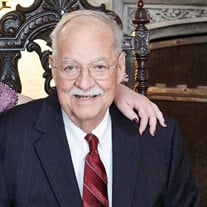 Richard “Dick” Anthony Ameisen Jr., 84 of Havertown, PA passed away September 6, 2020. He was at home surrounded by his wife and two daughters. Dick was born January 23, 1936 in Philadelphia, PA to Richard and Helen (née Dennis) Ameisen. He is survived by his loving wife of 46 years, Barbara (née Flohr) Ameisen, and three children, Elizabeth “Lisa” Ameisen, Richard Ameisen (Caroline), and Jennifer Lozano (Matthew). He had twelve grandchildren, Timothy Stanton-Ameisen (Irina Veramidis), Griffin Stanton-Ameisen (Dana Kreitz), Olivia Janis (Ben), Savanna Stanton-Ameisen, Evelyne Ameisen, Ethan Ameisen, Erik Ameisen, Stephen Lozano, Anna Lozano, Micah Lozano, Jane Lozano and Liberty Lozano. He is also survived by his older sister Denise Sheldon and predeceased by sister Patricia Herdeg (David) and son-in-law, James Stanton. Dick is a graduate of Germantown Academy and received a Bachelor’s in Economics from the University of Pennsylvania. He served in the United States Marine Corps Reserves until Honorable Discharge in 1964. He was employed by Strawbridge and Clothier (May Company) for 37 years, completing his time there as a Divisional Merchandise Manager of Menswear. After Strawbridge’s, Dick studied and obtained a Real Estate license and worked as an agent at Century 21 in Havertown before retirement. Dick, an avid reader and lifelong learner, had many hobbies, interests and a deep love for music. He could be found throughout the day playing mostly Jazz of the 40’s and 50’s on his piano. Dick and Barbara’s home is filled with beautiful pieces of furniture from his woodworking days. He was a fixture in his Havertown community participating in the Havertown Optimist Club and serving at his church, Hope United Methodist. Barbara and the family would like to express their gratitude for the wonderful care Dick received from Dr. Geoffrey Teehan and the Kidney Care Specialists of Wynnewood, PA. In lieu of gifts, the family asks that you send donations to the American Kidney Foundation by donating online at www.kidneyfund.org. A private interment will be held at Arlington Cemetery in Drexel Hill, PA on September 19th.

The family of Richard A. Ameisen created this Life Tributes page to make it easy to share your memories.

Send flowers to the Ameisen family.