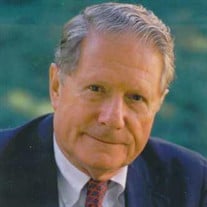 Dr. Richard A. Davis of Villanova passed away peacefully at his home on May 7, 2021. He was 95. Dr. Davis was born in Chicago on June 15, 1925, attended the Chicago Latin School and graduated from Princeton University with the class of 1947. He completed his Medical Degree at the Northwestern University Medical School in 1951 and a Master’s Degree in Anatomy in 1956. He was appointed the Kanavel Fellow during his six-year residency in neurosurgery under the direction of his father, Dr. Loyal Davis, at the Northwestern University Medical Center. He was taught the meticulous surgical techniques of Dr. Harvey Cushing by his father, who himself had been a junior associate of Dr. Cushing. As a resident neurosurgeon, Davis learned the principles of patient evaluation, the critical importance of postoperative management and the paramount significance of empathy in the surgeon-patient relationship. Dr. Isador Ravdin, the John Rhea Barton Professor of Surgery, appointed Dr. Davis to the clinical and medical school faculty of the University of Pennsylvania in 1958 which led the younger Dr. Davis to a 30-year neurosurgical career at the University of Pennsylvania, its hospital and medical school. At Penn, Dr. Davis organized a research laboratory to investigate central nervous system control of gastric secretion and its relationship to peptic ulcer disease. His laboratory was supported by one of the first research grants from the National Institutes of Health to study this problem, and his findings anticipated surgical innovations for neurologically-based ulcers. He also introduced then revolutionary stereotactic techniques to the university’s large brain tumor service and pain clinic. These procedures reached structures deep within the brain for the treatment of Parkinson’s Disease, biopsy of brain tumors and other neurological illnesses. Dr. Davis taught the principles of neurological surgery to a generation of University of Pennsylvania medical students and residents through a series of lectures, patient examinations and in the operating room. Students were challenged to use their knowledge of the basic sciences to solve clinical neurosurgical problems. In later years it was a source of satisfaction to Dr. Davis when former students expressed their appreciation and gratitude for his time and effort devoted to their education and suggesting various opportunities that complemented their interests. He taught and led by example. Despite his rigorous insistence on clinical precision, he also exemplified the warmth and humility that are essential for true excellence in medicine. He discouraged the dehumanizing connotations of the word ‘case’ when referring to his patients, who will remember him for his compassion and kindness perhaps above all else. Dr. Davis believed that a senior neurosurgeon should be the first author of a clinical or research paper because he had done the work and should take the responsibility for the facts and conclusions of a medical-surgical article. He published over fifty papers on a variety of subjects, ranging from extensive anatomical studies, the treatment of spinal cord tumors and disc disease, to statistical evaluations of neurosurgical creativity. Several seminal papers on large numbers of spinal disc disease with long range follow up evaluations, emphasized that spinal operations were the most commonly performed operations by neurosurgeons, but a literature revue of over 20,000 papers revealed that less than one per cent of all neurosurgical papers addressed this problem. A lifelong interest in the history of warfare and related surgical problems, spawned a five-year research project that first detailed the neurosurgical treatment of Field Marshal Erwin Rommel’s near fatal head injury during the Normandy campaign and its relevance on the outcome of World War 11. Other historical vignettes documented the effects of illness on historical figures from the assassination of Obergruppen Furhrer Reinhard Heydrich to the martyrdom of Thomas Beckett, the Archbishop of Canterbury. In the late 1980’s Dr. Davis developed fluency in French and over the years made annual visits to Normandy for the commemoration of D-Day. In 1999 he published a well-received novel, “Yours, D3” in which a young parachute officer grapples with the issues of honor and leadership during World War II. Former first lady, Nancy Davis Reagan, Dr. Davis’ sister, often played hostess to the Davis family at the White House during the 1980’s. Dr. Davis’ longtime friendship with President Reagan was one of mutual trust and affection, highlighted by many moments of levity. Dr. Richard Davis demanded much of himself and others in the pursuit of what he referred to as “the University hospital trinity,” superb patient care, devotion to teaching and excellence in neuroscience research. He was an avid golfer, a member of the Merion Golf Club, and believed the game, like surgery, held special meaning and challenge as a performance for and against himself. Dr. Davis is predeceased by Patricia, his wife of sixty years and survived by his son Geoffrey; daughter Anne Peterson; son in-law Jon Peterson: grandsons Chris, Tim and Nick Peterson. In lieu of flowers, donations may be made to the Chicago Latin School.

Dr. Richard A. Davis of Villanova passed away peacefully at his home on May 7, 2021. He was 95. Dr. Davis was born in Chicago on June 15, 1925, attended the Chicago Latin School and graduated from Princeton University with the class of 1947.... View Obituary & Service Information

The family of Dr. Richard A. Davis created this Life Tributes page to make it easy to share your memories.

Dr. Richard A. Davis of Villanova passed away peacefully at his...

Send flowers to the Davis family.