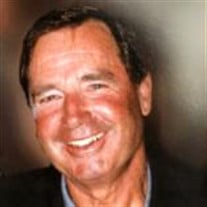 Dr. Richard Campbell Drummond left us on December 29, 2019 at 81 years of age. He met his soulmate, Nancy (Austin) Drummond, in 8th grade and they were married for 60 wonderful years. Rick was born September 2, 1938 and grew up on the New Jersey Shore before attending Riverside Military Academy in Gainesville, GA. He was appointed to the U.S. Naval Academy and was a proud alumnus of the Class of 1961, 22nd Company. Rick viewed the Naval Academy as his first true home, and the springboard for his life’s accomplishments. Rick had two distinct and remarkable careers. In the Navy, he traveled the world as an officer aboard a submarine and taught tactics and weaponry at the U.S. Submarine School in Groton, CT. He retired as a Navy Captain after 20 years of service. Rick launched a second successful career as an orthodontist after attending the University of Pennsylvania School of Dental Medicine, graduating with top honors. He practiced for 35 plus years on the Main Line of Philadelphia where he lived for the remainder of his life, returning every summer to Newport, RI with his family. Rick had a zest for life and was passionate about being outdoors - boating, fishing, golfing, skiing or going for his daily run. He cherished his buddies, many of whom shared his love of golf and other athletic activities; he had an infectious laugh and his exuberance infused every outing. Most of all, Rick enjoyed spending time with his family and was dedicated to enriching his children and grandchildren through shared experiences. He mentored numerous young people and fulfilled many leadership roles in his community. He was a member of the Newport Country Club, Ida Lewis Yacht Club and Philadelphia Country Club where he served as Golf Chairman. Including wife Nancy, Rick is survived by Brad Drummond and wife Nancy of Westlake Village, CA, Tami D. Anton and husband Charles of Lincoln, MA, Tracy Drummond and partner Mary Leedy of Morristown, NJ, brother William Drummond of Atlantic Highlands, NJ and six grandchildren: Austin, Jacqueline and Spencer Anton, Campbell, Greer and Sterling Drummond. A funeral service will be held on Saturday February 1, 2019 at 11 A.M. Church of the Redeemer, 230 Pennswood Rd, Bryn Mawr, PA. In lieu of flowers, contributions can be made to Class of 1961 Professor in Leadership Education Fund, U.S. Naval Academy Foundation, 274 Wood Road, Annapolis MD 21402. Please designate your gift in memory of CAPT Richard C. Drummond. https://www.usna.com/give/DrummondMemorium.

Dr. Richard Campbell Drummond left us on December 29, 2019 at 81 years of age. He met his soulmate, Nancy (Austin) Drummond, in 8th grade and they were married for 60 wonderful years. Rick was born September 2, 1938 and grew up on the New... View Obituary & Service Information

The family of Dr. Richard Campbell Drummond created this Life Tributes page to make it easy to share your memories.