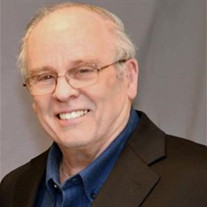 Richard M. Force, born in Albany, New York April 20, 1944 and died January 30, 2018. He lived most of his young life in Groton Connecticut. He grew up there being active in the Boy Scouts of America, earning the Order of the Arrow and Eagle Scout. He moved on after graduation from the Fitch Senior High School to Yale College and then on to Yale Graduate School earning a Master of Arts Degree. After graduation he settled in Philadelphia to attend the University of Pennsylvania doing postgraduate study. He married Beth Ann McFarland in November 1976 and was Executive Director of Main Line Project Learning, a cooperative program for Federal Funding in the Lower Merion, Haverford and Radnor School Districts. He served as President of PAFPC (Pennsylvania Association of Federal Program Coordinators) and NAFEPA (National Association of Federal Education Program Administrators). One of the highlights of his career was testifying before Congress on behalf of the children qualifying for federal funds in the United States. He was active in local governance serving as President of Wynnewood Valley Civic Association and moving on to be President of the Federation of Lower Merion Civic Associations. An accomplished pianist, he played the piano on return from work each day stating that it was “his martini” before dinner. Another avocation for Dick was sketching wherever he happened to be in his travels. Dick always had time to help those in need and enjoyed serving as Deacon at the Bryn Mawr Presbyterian Church in Bryn Mawr, Pennsylvania. After retirement, he and Beth Ann moved to Bethlehem in 2010 to be closer to his family, a son, Richard M. Force, Jr., daughter-in-law, Megan Force and grandchildren, Isabella and Jaxon. His sister, Barbara Bartos, resides in Carlisle Pennsylvania. An 11:00 a.m. memorial service is scheduled for May 5, 2018, at the Bryn Mawr Presbyterian Church, 625 Montgomery Avenue, Bryn Mawr, PA. In lieu of flowers please make donations to the Alzheimer’s Foundation for Research, 225 N. Michigan Ave., Fl. 17, Chicago, IL 60601.

Richard M. Force, born in Albany, New York April 20, 1944 and died January 30, 2018. He lived most of his young life in Groton Connecticut. He grew up there being active in the Boy Scouts of America, earning the Order of the Arrow and Eagle... View Obituary & Service Information

The family of Richard Michael Force created this Life Tributes page to make it easy to share your memories.

Send flowers to the Force family.