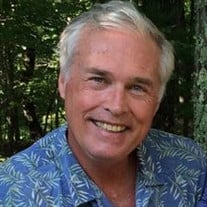 Rhett Austell, on November 14, 2018, Robert Rhett Austell III, age 65, of Haverford, PA and Barryville, NY died peacefully with his wife and children at his side. Rhett is survived by his 93-year-old father, R. Rhett Austell, Jr. Of York, ME and stepmother Carol McCarty Austell. He is survived by his wife of 43 years Barbara Austell, children Kate Austell Elortegui and R. Rhett Austell and their spouses Dan Elortegui and Sarah Caldwell, and grandchildren Sebastian and Benjamin Elortegui and Tess and Thora Austell. He is also survived by his sisters Liz Straight and Sarah Cart. Rhett grew up in Briarcliff Manor, NY and attended The Hotchkiss School. He received his undergraduate degree from Williams College and his MBA from Columbia University. Rhett spent his early professional career in marketing and advertising, but found his vocation in pursuit of good government. He was Chair of the NJ Common Cause organization in the 1990s. After moving from Ridgewood, NJ to the Philadelphia area in 1996, Rhett formed a not-for-profit, non-partisan organization, PoliSci Financials, to examine the financing of political candidates in the state of NJ. After retiring several years ago, Rhett found another interest he pursued with his children: marathon running. From age 55 to 63 he ran 14 marathons all around the US and in Paris, France. He planned to run next year in the San Diego marathon for the second time, to celebrate 10 years of marathon running. He lived an active life and was very proud of climbing Mt Kilimanjaro with daughter Kate and her husband Dan and their friends in 2011. While he had many hobbies and interests, Rhett’s family was the most important interest in his life and he was always ready to drop whatever he was doing to be with them. His memorial service will held on Wednesday January 2nd. at 11 AM in the Chapel of Bryn Mawr Presbyterian Church, with a reception to follow. In lieu of flowers, contributions in Rhett’s memory may be made to the Leukemia & Lymphoma Society, Donor Services, PO Box 98018, Washington DC 20090-8018 or to the ImmunoRevolution Fund at Penn Medicine’s Abramson Cancer Center, Attn. Penn Medicine Development, 3535 Market Street, Suite 750, Philadelphia, PA 19104.

Rhett Austell, on November 14, 2018, Robert Rhett Austell III, age 65, of Haverford, PA and Barryville, NY died peacefully with his wife and children at his side. Rhett is survived by his 93-year-old father, R. Rhett Austell, Jr. Of York, ME... View Obituary & Service Information

The family of Robert Rhett Austell III created this Life Tributes page to make it easy to share your memories.