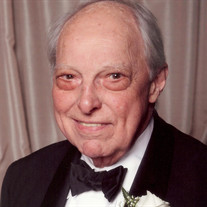 Robert Joseph Gill, MD, died on Wednesday evening, July 25th, 2017, at the age of 96 at his home on Spruce Street, across the street from Old Pennsylvania Hospital, founded by Benjamin Franklin and the first hospital in the nation, where Doctor... View Obituary & Service Information

The family of Robert Joseph Gill M.D. created this Life Tributes page to make it easy to share your memories.

Send flowers to the Gill family.