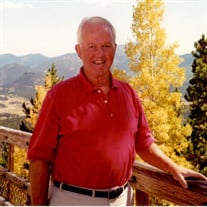 On Monday June 1, 2020, Roger A. Swanson, loving husband and beloved father peacefully passed away at the age of 89 in Newtown Square, PA. Roger was born in 1930 in Winthrop, MA, the youngest of four sons of Martin and Hazel Swanson. He was pre-deceased by his brothers, Richard, Ralph, and Robert. He grew up in Winchester, MA, on the Mystic Lakes, and graduated from Winchester High School (1948). Roger earned an engineering degree from Harvard University (1952) and an MBA from the Harvard Business School (1956). He served as an ensign in the Navy (1952-1954) during the Korean War. Roger was a successful businessman whose career began at Sylvania Electric; grew into running several mid-sized companies; and concluded with him building his own home security business. Roger was married to Janet, the love of his life, for 58 years prior to her passing in early 2019. They shared a love of golf, travel, dancing and time at their favorite getaways at Hemlock Farms, Wingaersheek Beach, and Vero Beach. They were active members of the Mountainside Presbyterian Church each serving in leadership roles. Roger was a proud father and grandfather to his four children and ten grandchildren, offering enthusiastic support, sage advice and loving guidance to their lives. Roger loved sports and competition. He grew up playing tennis, was an accomplished sailor and an avid golfer. Plus, family skiing was a challenge he enthusiastically accomplished in his 40’s to spend more time with his children. He enjoyed any and all forms of competition from rounds of golf with friends, to weekend sailing races, to board games with the family. He also loved all the Boston and Harvard sports teams and was a passionate and vocal fan throughout his life. Roger is survived by his daughter and son-in-law Cheri and Brad Paulsen of Cheshire, CT; his son and daughter-in-law Martin and Susan Swanson of Paoli, PA; his daughter and son-in-law Sandie and Kevin Nicholson of Berwyn, PA; and his daughter and son-in-law Kim and Mark Kramer of Frisco, CO. Also surviving Roger are his beloved grandchildren, Kate Paulsen, Jennie Paulsen, Ryan Swanson, Brittany Swanson, Will Swanson, Patrick Nicholson, Sarah Nicholson, Kyle Nicholson, Annika Kramer and Sam Kramer. A private memorial service will be held at a future date. Interment will be private at the Wildwood Cemetery in Winchester, MA. In lieu of flowers, the family asks that donations can be made to Dana-Farber Cancer Institute in memory of Roger Swanson at www.jimmyfund.org/gift.

On Monday June 1, 2020, Roger A. Swanson, loving husband and beloved father peacefully passed away at the age of 89 in Newtown Square, PA. Roger was born in 1930 in Winthrop, MA, the youngest of four sons of Martin and Hazel Swanson. He was... View Obituary & Service Information

The family of Roger A. Swanson created this Life Tributes page to make it easy to share your memories.

Send flowers to the Swanson family.