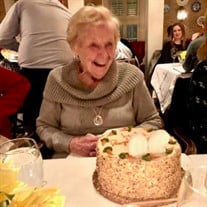 Rosemary N. Shea, November 9, 1929 – January 24, 2021 On November 9, 1929 Rosemary (nee Nolan) entered into this world, the second of five children to William T. and Mary E. Nolan. In a cozy rowhome in West Philadelphia, Rosemary started her life-journey, which lasted over nine decades. Rosemary is predeceased by her loving husband, Bill Shea, Sr. and survived by her four children including Bernadette Butera (Jay), Bill Shea, Jr. (Joanne), Patrick Shea (Kim-Marie) and Hugh Shea. She is also survived by her thirteen grandchildren including Laura Butera, Emily Butera, Kayleigh Butera, Will Butera, Patrick Shea, Christina Shea, Brendan Shea, Liam Shea, Mary Kate Shea, Michaela Shea, Colin Shea, Julianne Shea and Danny Shea. Lastly, she is survived by her siblings Bill Nolan, Jack Nolan, Eileen McConville and Kathleen Hannigan. Rosemary grew up with her two brothers and twin sisters on Felton Street in West Philadelphia, moving to Havertown years later. The Nolan siblings were 13 years apart from oldest to youngest and as adults, settled in Pennsylvania, New Jersey, Oklahoma, Florida and Maryland. Despite this gap in age and distance, they were so close, talking with one another several times a week. They meant so much to her and she meant so much to them. Their love for one another was unassuming but evident in the way they treated each other with respect, dignity and humor. The Nolan sisters were particularly close and became the nexus of their immediate and extended families sharing news of the next family occasion, big or small. By the time they were grandmothers, they had so effectively honed their communication skills that family news made it around the world twice while the internet was still putting on its pants. The Nolan girls were the original “Insta-Gram.” A graduate of West Catholic Girls’ High School (1947), Rosemary grew up helping her mother take care of her twin sisters, going on long walks with her father, ice skating in Cobbs Creek, listening to Big Band music and taking the bus, trolley and El to every dance imaginable with her girlfriends. After high school, Rosemary went to work for Greyhound Bus. She took advantage of her employment by spontaneously traveling on weekends throughout the northeast and Canada. Rosemary passed along this spontaneity and love of travel to her children and grandchildren. At a time when young women were encouraged to go to work after high school, get married and start a family, Rosemary took to the road, exercising her independence and exploring the world. This aspect of her life was inspirational and aspirational, more so to her granddaughters. In 1956, Rosemary took flight with the love of her life, Bill. Having four children between 1957 and 1961, she managed and navigated a household that never stopped. She was also her husband’s equal partner in business, working together for nearly 30 years. Rosemary and Bill shared their love of Cape May Point with their children, spending magical summer vacations in a time and place that no longer exists but for the memories she helped bundle and are forever cherished. Later, they bought a charming old house in Cape May City, mere footsteps away from the warm sand and salty sea. After her husband’s passing in 1992, Rosemary was eventually blessed with thirteen grandchildren that affectionately referred to her as “Gram.” Gram never missed a birthday, sacrament, recital, play, sporting event, graduation or holiday. At Christmas, she would hang thirteen stockings over her mantle, each bulging with gifts that had a special meaning for each grandchild. For almost thirty years, Gram hosted a “Cousins’ Christmas” party serving generous portions of Picas Pizza, presents, personal attention and love. On January 24, 2021, with her four children at her side, Rosemary peacefully passed into the loving embrace of our Lord. Her Funeral Mass will be private, but live streamed https://www.facebook.com/Saint-Denis-Church-1109742115732597/ on Fri. Jan. 29th. at 11 AM. A celebration of her life will be held at a future date. In lieu of flowers, contributions may be made in her memory to Meals on Wheels(https://www.mowdelco.org/)

The family of Rosemary N. Shea created this Life Tributes page to make it easy to share your memories.

Send flowers to the Shea family.