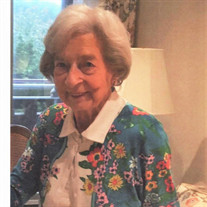 Ruth Gullyes Watermulder (September 24, 1922 – October 23, 2021) Ruth G. Watermulder died at her home at Waverly Heights, Gladwyne, PA. on October 23 surrounded by her three children. She was the wife of the late Rev. Dr. David B. Watermulder. She is survived by their three children: Paul Gustav (Eugenia) of San Mateo, CA, Peter Joseph (Christine) of Horseshoe, NC, and Martha Ruth of Casco, ME. Six grandchildren: Rebecca Ruth Bales (Andrew) of New York City, David Gustav (Lisa) of Los Gatos, CA, Sarah Eugenia (Anton Belo) of Half Moon Bay, CA., and Timothy Edward (Mia Simon) of Oakland, CA, Jonathan Louis of Boulder, CO, and Jennifer Louise Flood (Megan Flood) of Tryon, NC. Also, ten great-grandchildren. A Memorial Service is Thursday, October 28 at 2 pm at Bryn Mawr Presbyterian Church, 625 Montgomery Ave., Bryn Mawr PA 19010 Ruth was born in Ambridge, PA to Joseph and Irene Gullyes, the middle child between two brothers. She was raised in a family deeply involved with its church, with helping people in need, and with the extended family throughout the Pittsburgh region. She is an alumna of Muskingum College (where she later served on the Board of Trustees and was subsequently received the 1997 Distinguished Alumni Service Award). She began a lifetime of combining deep religious faith, family values, and pioneering advancement of children’s education and in developing leaders for tomorrow. Seeking to become a missionary, she worked as director of the Lower Church School and was a teacher in the Weekday School of the historic Brick Presbyterian Church of New York City. In 1946 she married and began a lifetime of activity as a pastor’s wife. The couple served in New Jersey, Watertown, NY, suburban Chicago, and finally Bryn Mawr, PA working with a wide diversity of people in both advantaged and disadvantaged circumstances. Ruth was much involved in the school life of her children and soon became aware of the problems of children who are visually impaired. She formed a group that initially prepared large print copies of tests and other class materials and ultimately brought forth large print textbooks to public schools. This “seeing awareness” led to the founding of a local organization that soon affiliated with the National Association for the Visually Handicapped (NAVH). These efforts in turn gave way to new technological advances and the induction of state aid providing material for the visually impaired. Ruth served as chair of the Montgomery County Association for the Blind, also on the Board of the Emergency Aid Society of Pennsylvania Foundation where she served as president, as a volunteer with Meals on Wheels, and at the Timothy School (for children on the autistic spectrum). She was a district chair for the United Fund of Philadelphia, and a member of FISH. Ruth Watermulder’s religious devotion has been unwavering. She organized a “Y” group for young women and a mother’s group and has led women’s workshops for her congregation. She has worked with the Sunday school, established a Weekday School, and directed the Nursery and the Kindergarten departments in Bryn Mawr, PA. She has also served on mission tours of South Korea, Japan, and various countries in Africa. Reflecting on her achievements, she says, “My deepest satisfactions have come in teaching preschool children in the church, counseling their parents and helping to develop leaders for tomorrow.” Her family will always treasure the elegant meals she prepared, and the warmth of family holiday gatherings especially times around the piano with hymns and carols, Ruth Watermulder's legacy of Faith, Hope and Love is rich inspiration for many. In lieu of flowers, contributions may be made in her memory to Bryn Mawr Presbyterian Church. The service will be livestreamed on https://www.bmpc.org/livestream

Ruth Gullyes Watermulder (September 24, 1922 &#8211; October 23, 2021) Ruth G. Watermulder died at her home at Waverly Heights, Gladwyne, PA. on October 23 surrounded by her three children. She was the wife of the late Rev. Dr. David B. Watermulder.... View Obituary & Service Information

The family of Ruth G. Watermulder created this Life Tributes page to make it easy to share your memories.

Send flowers to the Watermulder family.