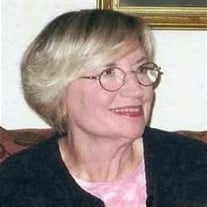 Ruthanne Renzi of Belmont Hills, 70, died peacefully at home on March 30th surrounded by her loving family after a long battle with ovarian cancer. Ruthanne was born February 23rd, 1949 in Bryn Mawr, PA. She was preceded in death by her parents John and Marie Johnstone, her brother Thomas Johnstone, and her sister Donna Burger. Ruthanne was a graduate of Harriton High School (class of 1967) and became a Registered Nurse (RN) upon graduating from the Woman’s Medical College of Pennsylvania (class of 1970). Ruthanne enjoyed her career as a nurse and she spent the majority of her career at The Fairmount Behavioral Institute in Philadelphia, PA, where she specialized in psychiatric nursing. She met her husband Anthony (Tony) Renzi in 1990, and they tied the knot on March 28th, 1998. Ruthanne’s hobbies and passions included ballet, jazz and tap dancing, collecting jewelry, the Spanish language, and travelling. Since early childhood, she had been an animal lover and animal advocate, especially of cats. She spent enormous time, effort, and resources working with feral cats within Philadelphia, including trapping, fixing, releasing, and feeding. She was also a generous supporter of the ASPCA and World Wildlife Fund (WWF). A kind and loving woman, she was also known for her directness and honesty. She loved to spend time with her family and enjoyed good food and good wine. Ruthanne was a beloved wife, sister, mother, and grandmother. In addition to her husband Tony, Ruthanne is survived by her brother John Johnstone, her son David Ian Raker, and her grandchildren Andrew Edward Raker, Leatitia Raker, and Solidad (Soli) Salgado. The family will receive guests after 10 AM on Friday April 5th at Saint John’s Episcopal Church, 404 Levering Mill Road, Bala Cynwyd, PA, where her Memorial Service will follow at 11 AM. In lieu of flowers, donations may be made to Providence Animal Center, 555 Sandy Bank Road, Media, PA 19063.

Ruthanne Renzi of Belmont Hills, 70, died peacefully at home on March 30th surrounded by her loving family after a long battle with ovarian cancer. Ruthanne was born February 23rd, 1949 in Bryn Mawr, PA. She was preceded in death by her parents... View Obituary & Service Information

The family of Ruthanne Renzi created this Life Tributes page to make it easy to share your memories.

Send flowers to the Renzi family.