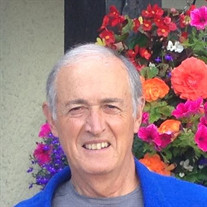 Rev. S. Sturgis Poorman, Jr., 73, of Bryn Mawr, PA, passed away peacefully, surrounded by family, on September 24, 2018. Sturge was born on June 21, 1945 in Nashville, TN to Dr. S. Sturgis and Christine (Freeland) Poorman. Sturge grew up in Ardmore, PA, where he attended Lower Merion High School and Haverford College, starring on both the baseball and soccer teams. He was awarded Haverford’s Varsity Cup in 1967 as the most outstanding senior athlete. He is survived by his wife Joanne (Rainey), who he met as a teenager at Ardmore Presbyterian Church. They married immediately after Sturge’s graduation from Haverford College with a bachelor’s degree in history and they enjoyed 51 loving years together. Sturge went on to earn his master’s degree in divinity at Princeton Theological Seminary in 1970. He started his career as a Presbyterian pastor in upstate NY. Together, Sturge and Joanne threw themselves into creating loving communities of faith wherever they went. He served at four different churches over 30 years—at both West & East Hebron Presbyterian Churches in Hebron, NY, then at City Presbyterian Church in Harare, Zimbabwe, and finally at the First Presbyterian Church in Phoenixville, PA. Sturge was willing to take risks when he heard God’s call. First was his decision to move his young family to Harare, Zimbabwe in 1984, only four years after that country gained independence. In 1994, it was to become an Ecumenical Peace Monitor, through the World Council of Churches, during South Africa’s first free elections, which ended 50 years of apartheid. In 1999, after retiring as a pastor, he stepped out on faith again, founding Welcoming the Stranger, a nonprofit in Bucks Country dedicated to serving the educational needs of immigrants and refugees. His work advocating for immigrants and refugees continued to the end of his life. Sturge led Welcoming the Stranger for 17 years before retiring at the age of 70. While retired he continued to volunteer his time and helped start a small ministry mobilizing local churches to help refugees and asylum-seekers find temporary housing and to connect them with other vital services upon arrival in the United States. Sturge was a joyful and kind presence in every setting. He never tired of competing athletically, reveling in competition his entire life. He was playing basketball twice a week and pitching in a church softball league into his 70s. More than anything else, he loved the company of friends and family, and had hundreds scattered throughout the world. He loved talking and listening—about faith, about family, about whatever was on the heart of the person in front of him. To talk to Sturge was to feel welcome and to feel heard. In addition to his wife, Sturge is survived by his sons Aaron and Garth; a daughter Keli (Del) Dzordzorme; his grandchildren Marco, Ivan, David and Abby; his brother Donald (Sherina) Poorman; and countless others who he considered and cared for as family. He was predeceased by both his brother and sister-in-law, John & Bobby Poorman. A memorial service will be held at Ardmore Presbyterian Church, 5 W. Montgomery Ave., Ardmore, PA 19003 on Saturday, October 6 at 2pm, with a reception to follow. Donations in his honor may be sent to Welcoming the Stranger, PO Box 1156, Langhorne, PA 19047 or Ardmore Presbyterian Church. Please specify “Sturgis Poorman Memorial”. All donations will go toward programs Sturge helped start because he felt God’s call to work tirelessly to welcome immigrants, refugees and asylum seekers to this country.

The family of Reverend S. Sturgis Poorman Jr. created this Life Tributes page to make it easy to share your memories.

Send flowers to the Poorman family.