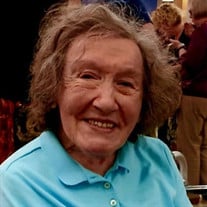 Sheila Maureen Carson, 86, of Simpson House, Philadelphia PA passed away peacefully on Tuesday morning, November 12, 2019, surrounded by family at Lankenau Hospital in Wynnewood PA. Sheila was born in Toxteth, a neighborhood in Liverpool England on April 7, 1933 to the late Ellis Hignett Carson and Hilda Palfery Carson (nee Adams). Sheila emigrated to New York City with her brother and parents arriving the day before her birthday in 1938, and they settled in Scarsdale NY. Sheila loved helping others and was a life-long learner. Sheila graduated with honors from Scarsdale High School and was an accomplished flute and piccolo player enjoying symphonic and marching band. She graduated Phi Beta Kappa with a liberal arts degree in history in 1955 from Randolph-Macon Woman's College in Lynchburg VA. Armed with a teaching certificate, Sheila taught public school for two years in Albany NY and one year in Duxbury MA. While teaching, Sheila earned a master’s degree in French history from Atlanta Georgia’s Emory University in December 1958, and she discovered her love of sharing books with children. Sheila left teaching and worked in the Milton MA library system from 1960-61 attending Simmons College part-time in the evenings to pursue a master’s degree in library science, which she earned in 1962. In June 1962, Sheila moved to Philadelphia PA and began her library career. She first worked at a college library, and then was hired by the Free Library of Philadelphia to work as a children’s librarian. After a 30-year career with the Free Library she retired following her service as the Branch Librarian for the Haddington Library in West Philadelphia. Sheila loved introducing children to the wonderful world of books, and was most proud of the many successful summer reading programs she created for neighborhood children of all the libraries she served. Sheila was an active member in The American Library Association serving on several committees throughout her 35-year membership. She was also a quiet philanthropist as an alumna to her three colleges, as well as over 40 national and local civic and arts organizations and several religious organizations such as the Society of St. Margaret (Duxbury MA), Church of the Good Shepherd (Rosemont PA), The Church of St. Luke and The Epiphany (Philadelphia PA), and Episcopal Community Services. Sheila survived a battle with cancer when she was 65, after which she was an active award-winning volunteer for many years with Reach for Recovery through the American Cancer Society. She welcomed the Hovey family to Philadelphia in 1996 and enjoyed family dinners followed by card games where a favorite was UNO. She is survived by a brother, David E. A. Carson, and a sister, Virginia R. Tuttle (nee Carson), and is well loved by her seven nieces and nephews, 16 great-nieces and great-nephews, friends, and extended family. A celebration of Sheila’s life will be held Saturday, November 16, 2019 at St. Mary’s Episcopal Church (36 Ardmore Ave., Ardmore) at 10:00 a.m. conducted by The Rev. Rodger C. Broadley and The Rev. Barbara Abbott. In lieu of flowers, donations can be made to the Free Library of Philadelphia, https://libwww.freelibrary.org/support/tribute-gifts or to The Church of St. Luke and The Epiphany, http://slatechurch.net/.

The family of Sheila M. Carson created this Life Tributes page to make it easy to share your memories.

Send flowers to the Carson family.