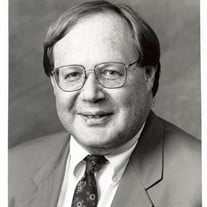 Sheldon John “Mike” Michaelson passed away peacefully on Sunday, November 25, 2018 after a lengthy illness. His family was with him. Sheldon was born February 2, 1953 in Philadelphia to the late Isadore and Helen (nee Smith) Michaelson, the fourth of five children. He was raised in South Philadelphia, and graduated from Central High School, Class #229, in 1970. Sheldon went on to Drexel University, and graduated from their co-op program in 1975 with a BSBA. He spent his co-op year at Touche Ross, now Deloitte, and he joined the firm’s tax department upon graduation. When he was first introduced around to his new colleagues, he was asked, “What do you go by? Mike?” Sheldon said yes, and that is how he became Mike Michaelson. In his early years, Mike served area clients, and developed a specialization in state and local taxation. One of his projects from those days was to help develop The Guidebook to Pennsylvania Taxes, which is still published annually, and still bears his name as co-author. He was elevated to partner in 1983, and served as the lead federal tax partner on a number of significant public companies. He was active in several professional associations, and spoke and published frequently on federal and state tax topics. Later, Mike joined Deloitte’s multistate tax practice area. He consulted on state tax topics for a broad range of Fortune 1000 clients across industries. Beyond his professional expertise, Mike is perhaps most fondly remembered at Deloitte for his mentorship, sage advice, and contribution to the careers of many tax professionals who came after him. Mike loved Deloitte, and retired in 2013 after 38 years only because his health had begun to fail. He never had and never wanted another job. Mike married Susan Pimentel in 1991, and they raised their two sons, Jeffrey and Daniel, in Radnor. In breaks from his significant travel schedule, Mike coached the boys’ Radnor-Wayne Little League and Radnor Rec Basketball teams, and cheered them on in lacrosse. He particularly enjoyed contemplating, researching, and planning travel, and took the family on many memorable vacations around the world. A Philadelphia sports fan, he also reveled in watching and attending as many games with his sons as he could. Mike was delighted when Jeff married Maria Helena Fernandez in 2016, and thrilled with the birth of his first grandchild, Gabrielle, in March. In addition to his immediate family, Mike is survived by his sister, Irene Birnbaum, his brother, Allen, his niece April Birnbaum Mackoff, and nephews Marc and Scott Klasky. He was predeceased by his sister Mary Klasky, and brother Marvin. He loved and was loved by his many in-laws. Mike, always proudly Jewish, preferred secular expressions of his heritage. Although the family recognized both Jewish and Christian holidays, he supported Susan in raising their sons as Christians. Over time, however, surrounded by the Christian faith of his wife and sons, Mike gradually began to move toward it as well. By the end of his life, he, too, formally accepted Jesus as his Messiah. There will be a Memorial Service for Mike on Monday, December 10th at 2:00 p.m. at Ardmore Presbyterian Church, with time to greet the family thereafter. Memorial contributions may be made to The Radnor ABC House; The Paoli Hospital Foundation Nursing Excellence Fund; or the Gary Sinise Foundation.

Sheldon John &#8220;Mike&#8221; Michaelson passed away peacefully on Sunday, November 25, 2018 after a lengthy illness. His family was with him. Sheldon was born February 2, 1953 in Philadelphia to the late Isadore and Helen (nee Smith) Michaelson,... View Obituary & Service Information

The family of Sheldon J. Michaelson created this Life Tributes page to make it easy to share your memories.

Send flowers to the Michaelson family.