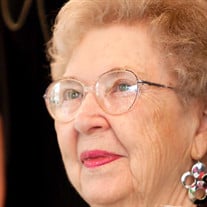 Shirley A. Brautigam, of Bryn Mawr, died September 13, 2016 at the age of 90. Shirley was born on May 12, 1926 in Detroit, Michigan to Leo and Lydia Harrington. Her parents passed away when Shirley was a young girl and she was raised by her aunt and uncle, Frieda and Henry Beisheim in Rochester, New York. She attended the University of Rochester for two years. On July 12, 1947, Shirley married Frank C. Brautigam and they had two children, Jane and Robert (Bob). Shirley was a gifted bookkeeper and after raising her children, returned to work as an executive assistant at Elmco, a forest products company in Wayne, PA where she worked until her retirement. She was an active member of PEO, where she served as president of her local chapter in the early 1990s. She was an outspoken presence and devoted member of St. Luke’s United Methodist Church in Bryn Mawr for over 50 years. She particularly loved her Tuesday morning ladies group and the fellowship they shared over the years, including bazaars and lunchtime study and conversation. She also loved her dear Sunday brunch friends whom she met faithfully after church each week. To her friends and family, Shirley was well known as an immaculate housekeeper and wonderful baker, especially of holiday cookies. Her children recall one year in which she managed to bake 13 different kinds of Christmas cookies which lasted until Easter! And all of her grandchildren know that you must always sift the flour first. Shirley is survived by her children, Jane Brautigam (Carl Hemmeler) of Boulder, CO and Bob Brautigam (Patti Jo) of Landisville, PA; grandchildren, Jessica Garrow (Ted Parenti) of Aspen, CO, Robert Garrow (Shireen) of Boulder, CO, Kailey Brautigam of Landisville, PA and Corey Bradford (Kerel) of Chicago, IL.; great-grandchildren, Hazel Parenti and Lily and Eugene Garrow; brother Tom Harrington; and many other loving relatives and friends who will remember her candor, her loving spirit and her kindness. Shirley was a devoted wife, mother, grandmother, great grandma and friend. She will be dearly missed and always remembered. A celebration of life will be held at St. Luke’s United Methodist Church, Bryn Mawr, PA in the Spring. Contributions may be made in her memory to St. Luke United Methodist Church, Bryn Mawr PA.

Shirley A. Brautigam, of Bryn Mawr, died September 13, 2016 at the age of 90. Shirley was born on May 12, 1926 in Detroit, Michigan to Leo and Lydia Harrington. Her parents passed away when Shirley was a young girl and she was raised by her... View Obituary & Service Information

The family of Shirley A. Brautigam created this Life Tributes page to make it easy to share your memories.

Send flowers to the Brautigam family.