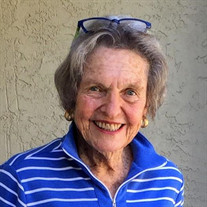 Maude Sinclair Adams Ziesing, of Bryn Mawr, passed away December 3rd at the age of 90 in the Beaumont Health Center, of complications from a stroke. Sis, as she was known to her friends, had rallied from the stroke two weeks before and made... View Obituary & Service Information

The family of Sinclair Adams Ziesing created this Life Tributes page to make it easy to share your memories.

Send flowers to the Ziesing family.