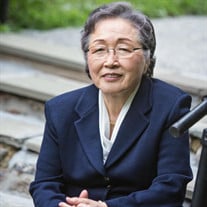 Early in the morning of April 25, 2020, Sung Ja Yoo lost her battle against the SARS-Cov-2 virus. She passed sleeping peacefully accompanied by her oldest son, succumbing to complications of COVID Acute Respiratory Distress Syndrome at the Hospital of the University of Pennsylvania in Philadelphia, PA. She was 84 years old. Born Sung Ja Choo in Pusan, South Korea, on March 4, 1936, she was the 1st child of Jae Joong Choo and Bong Lyun Yoon. As with other Koreans of her generation, she lived through the challenges of Japanese occupation and the Korean War. She eventually attending Kyunggi Girls’ High School. On October 8, 1955, she left Korea for the United States, where she studied at Goucher College in Towson, MD. In 1958, having graduated with her bachelor’s degree, she moved to Michigan State University in East Lansing, Michigan. She would eventually earn her Master of Science degree in physical chemistry studying first under Prof. Jack Kinsinger and later under Prof. Fred Horne. While a graduate student, she met Man Hyong Yoo, and they married in 1960. After her husband received his doctorate, they moved to Oak Ridge, Tennessee, where they raised their family of five, including their sons Phillip, Terry, and Christopher. Mrs. Yoo was widely traveled, accompanying her husband on year-long appointments as a visiting scientist twice to Japan, twice to Germany, and later back to Korea for three years where her husband was visiting faculty first at KAIST in Daejon and later at Seoul National University. She had a sustained interest in business and investment, following the financial markets all her life. In her retirement years, she continued to travel, though always returning to her beloved home in Tennessee. She attended the Masters golf tournament in 2013 and climbed Machu Picchu in Peru in 2014. After losing her husband in 2015 to colorectal cancer, she traveled back to Korea in 2016 to lay some of his remains to rest in the land of their birth. In recent years, she journeyed to Russia in 2016, Cuba in 2017, and frequently traveled across the United States to visit and remain in contact with her family. She is survived by her three sons, Phillip (and partner Renee), Terry (and spouse Penny), and Christopher (and spouse Kris) and six grandchildren: Jennifer, Ross, Sam, Marshall, Duncan, and Brendan. A funeral is not possible during the current public health crisis; memorial arrangements will be made when we can gather with her friends in safety for a remembrance and healing. In lieu of flowers, the family has designated Goucher College for memorial contributions. Gifts can be made online at https://community.goucher.edu/donate and select “Please specify gift designation” and indicate a memorial contribution for Sung Ja Yoo or contact Tierra Dorsey, 410-337-6417, directly if you have any questions.

Early in the morning of April 25, 2020, Sung Ja Yoo lost her battle against the SARS-Cov-2 virus. She passed sleeping peacefully accompanied by her oldest son, succumbing to complications of COVID Acute Respiratory Distress Syndrome at the Hospital... View Obituary & Service Information

The family of Sung Ja Yoo created this Life Tributes page to make it easy to share your memories.

Send flowers to the Yoo family.