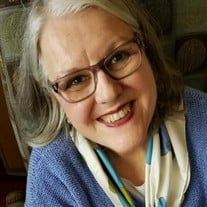 Susan Pimentel Michaelson, of Radnor, PA, beloved wife, mother, grandmother, sister, friend, and colleague, passed away on April 11th in Philadelphia, Pennsylvania. She was 62. Mrs. Michaelson, the daughter of Frank and Patricia Pimentel, was born in Prestwick, Scotland, on May 8, 1956, where her US Air Force father was on assignment with the Royal Air Force. She was the eldest of four children. After the family’s return to the United States and subsequent moves to Illinois, Nebraska, Maryland, New York, and Ohio, Susan attended Fairmont East High School in Kettering, Ohio, and then Georgetown University in Washington, D.C. where she graduated Magna Cum Laude from the School of Foreign Service. After a stint with Chemical Bank which took her to Wall Street in Manhattan and Houston, Texas, Susan returned to the northeast to earn her MBA at the Wharton School of Business at the University of Pennsylvania. Upon graduation she went to work at Deloitte and Touche in Philadelphia, where she met Sheldon “Mike” Michaelson, an accounting partner with the firm. Susan and Mike were married on May 4, 1991. They had two sons, Jeffrey Thomas and Daniel Mark Michaelson. They made their home in Radnor, PA. Once her children were established in school, Susan answered the call of education once again and earned her Master of Divinity from Westminster Theological Seminary. Following graduation, Susan was an Adjunct Professor who taught New Testament to undergraduates at St. Joseph’s University, and then an Adjunct Professor at Villanova University in the School of Church Management Graduate program. She found true joy teaching and participating in the administrations of several churches over the years, ultimately finding a home with Ardmore Presbyterian Church. Susan was a church elder and a devoted Women’s Bible Study participant. She was also very active in her community, serving on the Radnor School Board for 8 years. During this time, Susan was elected Vice President and President of the School Board. She was an active member and leader in the local Republican party. Susan was diagnosed with Interstitial Lung Disease in 2015, which progressed slowly for several years, but accelerated in the last three months, ultimately taking her life in spite of her valiant efforts to live. She is survived by her son, Jeffrey (Maria Helena) Michaelson, her son, Daniel Michaelson, her beloved granddaughter, Gabrielle Olivia Michaelson, her sister, Laura (Rick) Howard, her sister, Patrice (Robert) Brink, her brother, Frank (Gretchen) Pimentel, and numerous loving nephews, nieces, uncles, aunts, and cousins. She was proceeded in death by her parents, and then by her husband, Mike, in November 2018. Susan will be remembered for her matchless intellect, her force of personality, her fierce love, her generous spirit, and her wonderful, healing sense of humor. Most of all, she will be remembered for her all-encompassing faith in the saving work of Jesus Christ. Her Memorial Service will be held on Friday, April 26th 12 noon in Ardmore Presbyterian Church, followed by a reception at Radnor Hotel. Interment will be private at Valley Forge Memorial Gardens. Memorial contributions may be made in her memory to Ardmore Presbyterian Church.

The family of Susan P. Michaelson created this Life Tributes page to make it easy to share your memories.

Send flowers to the Michaelson family.