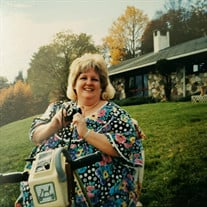 Susan E. Plummer (nee Cotter) of Belmont Hills, PA, after 64 blessed years, passed into glory on November 17, 2019. Born to Howard F. Cotter, III, and Patricia Ann Shearer as a conjoined twin to her younger sister, Jayne, at Bryn Mawr Hospital on July 20, 1955, (after which were the first successfully separated conjoined twins at BMH), Susan grew up in Penn Valley, attended Harriton High School, and pursued nursing at Widener College before switching to psychology. Prior to college, she served as a candy striper at Bryn Mawr Hospital and pursued many interests during high school. After graduating in 1978 with her degree, she experienced the two most important events of her life. She was married to Richard V. Plummer, and she trusted in Jesus Christ as her Lord and Savior. In the years that followed, Sue raised her son, Christian Norris Plummer, served as church secretary and youth leader at Narberth United Methodist Church, was manager (getting no respect she would joke) and singer with Sign of the Spirit, the touring contemporary Christian singing group she formed together with her two sisters and friends, and pursued a personal relationship with Jesus. Sue is survived by her husband, Richard V. Plummer, son Christian Norris Plummer, and younger sister Helenselene Purring. A memorial service will be held at 5 p.m., Tuesday, December 3, 2019, at the Narberth Presbyterian Church and all are welcome. In lieu of flowers, please make contributions to the Whosoever Gospel Mission 101 E. Chelten Ave., Philadelphia, PA 19144. “Yes, we are of good courage, and we would rather be away from the body and at home with the Lord.” 2 Corinthians 5:8

The family of Susan E. Plummer created this Life Tributes page to make it easy to share your memories.

Send flowers to the Plummer family.