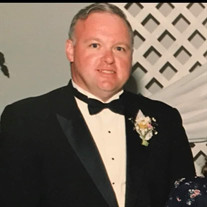 Thomas Francis Smith, Jr. February 10, 1951 – December 21, 2020 We rejoice, Thomas Francis Smith, Jr., has reached the end of his earthly journey and fallen into the loving arms of the Lord. His soul is at peace. Born in Philadelphia, Pennsylvania – Thomas is survived by his beloved wife of 36 years, Cindy. Thomas is predeceased by his parents Marie Elizabeth and Thomas Francis Smith, Sr., his sister-in-law Joanne Mundy, and his father in-law Frank Secunda In 1979 Thomas made his way to the shore to work on opening a deli, “Smitty’s Pantry” -few years later, Cindy, also of Pennsylvania, made her way to the shore to work on her tan. They met, fell in love and were married in 1984. They would settle in Seaville, New Jersey where they raised their daughters Joanne (Dominic) and Lisa (Renee). Joanne, an educator, and Lisa, a chef, were the great joys of his life – Thomas was proud to see his children graduate from college and took tremendous pride in his darling granddaughters Viviana and Sophia. Thomas would return to school to earn his BSN and became a nurse at Shore Medical Center where he would serve patients undergoing surgery in the OR. Thomas’ faith in God sustained him through his life, baptized at Saint Edmond’s in Philadelphia, he was a great studier of the Lord’s word and principles; with great zeal throughout his life, he sought to understand the teachings of Jesus. Thomas is further survived by his siblings Margaret (Frank) and Joseph (Judi); mother-in-law Janet, and his brother-in-law Paul. Thomas was blessed with a tremendous clan of aunts, uncles, nieces, nephews, and cousins. May the memory of Thomas, a servant of the Lord, a loving husband, father, and grandfather, be eternal. Services for Thomas will be held on Monday, December 28th, 2020 at 11am in Immaculate Heart of Mary Church. 819 E. Cathedral Road Philadelphia PA 19128. Burial will proceed to Calvary Cemetery in Conshohocken PA.

The family of Thomas F. Smith Jr. created this Life Tributes page to make it easy to share your memories.

Send flowers to the Smith family.