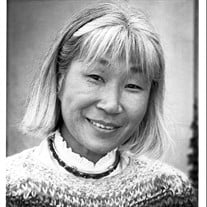 On October 2, 2018, Dr. Un-Jin Paik Zimmerman died at her home in Bryn Mawr, Pennsylvania at the age of eighty-five, after several months of hospice care. Un-Jin was born on October 28, 1932 in Seoul, Korea, to Paik Sang-Kyu and Han Ki-Choo. Her family lived through cataclysmic events of the Japanese colonial occupation of Korea, the Second World War and the Korean War. At Kyung-Gi Girls’ School, she excelled at academics, ping-pong and tennis. After high school, she was one of the first of two women in history admitted to Seoul National, the nation’s top medical school. During the Korean War, Un-Jin’s father Paik Sang-Kyu was taken as a hostage to North Korea after the first invasion and was lost forever to the family. He was the first Korean to graduate from Brown University (1904) in the United States, and owned a dictionary that Un-Jin borrowed to learn English. During a wartime exodus of civilians to Pusan, Un-Jin found employment as an extremely rare language translator at an U.S. Army-run hospital for war orphans. She applied to colleges in the United States and became one of the first Koreans to attend Bryn Mawr College. She ultimately received a Ph.D. in Chemistry from Bryn Mawr, as well as a B.S. degree from Yale University. While at Yale, Un-Jin was one of two women graduate students in all of the sciences. She married Dr. George Landis Zimmerman on May 31, 1958 and started a family. After teaching high school physics she began a 25-year career in biochemistry research at the University of Pennsylvania, where she published papers, won grants, and became professor emeritus of Physiology in 1999. Un-Jin was a multi-talented, creative, and charming woman who strove for excellence in everything. She managed a household of six, carrying out endless tasks required to keep everyone fed, clothed, and washed. She hosted elegant dinner parties, and played the alto recorder in chamber music gatherings. At the Merion Cricket Club, she was a popular tennis partner who won competitive tournaments. She decorated her home exquisitely with Korean art and planted flowers and shrubs to beautify the yard. In 2012, she published her memoir, Autobiographical Sketches of Un-Jin Paik Zimmerman. She is survived by four children, Landis Zimmerman, Emily Zimmerman, David Zimmerman and Louise Hoehl, and four grandchildren, Grace and Charlotte Zimmerman, and Karl and Katherine Hoehl. She is also survived by three siblings, Paik Kyung-Jin, Paik Hyung-Jin, and Paeck Sogene, as well as nieces and nephews Sam Won, Suzanne, Thomas, George, Alice, Katherine, Chang-ho, Kyung-hee and Kyung-hwa. She is also survived by her dearest friend and companion Dr. George Hermann. The memorial service will take place at 11:00 AM on Saturday October 13th at the Church of the Redeemer, 230 Pennswood Road, Bryn Mawr, Pennsylvania, followed by a reception at Wyndham Alumnae house at Bryn Mawr College, 235 North Merion Avenue, Bryn Mawr, PA. In lieu of flowers, contributions may be made in her memory to Penn Asian Senior Services, PASSi.

On October 2, 2018, Dr. Un-Jin Paik Zimmerman died at her home in Bryn Mawr, Pennsylvania at the age of eighty-five, after several months of hospice care. Un-Jin was born on October 28, 1932 in Seoul, Korea, to Paik Sang-Kyu and Han Ki-Choo.... View Obituary & Service Information

The family of Un-Jin P. Zimmerman created this Life Tributes page to make it easy to share your memories.

Send flowers to the Zimmerman family.