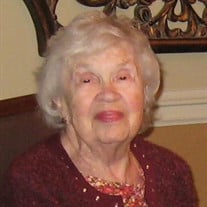 Vera Strazdins, born December 17, 1923, in Nitaure, Latvia, went to the Lord at her home in Wayne, Pennsylvania on January 22, 2022, with daughter Baiba by her side. Vera was in Hospice Care during the last two months of her life. Our family... View Obituary & Service Information

The family of Vera Strazdins created this Life Tributes page to make it easy to share your memories.

Send flowers to the Strazdins family.