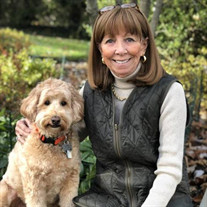 Virginia Morrill Ford passed away peacefully in her home at the age of 75 on Thanksgiving evening, November 25, 2021. She died from complications related to a combination of lung and breast cancer, as well as chronic obstructive pulmonary disease (COPD). It is typical of her spirit and stubbornness that it would take a trio of ailments to end her life prematurely. Commonly known as Barrie, Virginia Barrere Buchholz was born in Nashville, TN on October 22, 1946. She was born to Virginia Barrere and Ransom Russell Buchholz along with her sister, Lisa, and her brother, Ransom. When her mother remarried John R. Morrill, she became Virginia Morrill and moved with her family to the suburbs of Chicago. Barrie attended Arizona State University and afterwards became a flight attendant based in New York City for Trans World Airlines, where she enjoyed working international routes, particularly to Paris. While in New York she met her husband David B. Ford, whom she married in 1972. Shortly thereafter they moved to the suburbs of Philadelphia and bought the house in which she would live the rest of her life. Barrie’s two sons, David Jr. and Jamie, were born in 1974 and 1976 respectively, and their upbringing quickly became the main focus of her life. She was the consummate mother, devoting her time to their education, character, and athletics. Her passion for raising fine young men extended to her children’s friends as well; her knack for writing and grammar was shared with many who looked for her help in writing college essays or business school applications. She became commonly known as “Coach Ford” due to her enthusiastic support of her sons and their teammates at squash meets, crew regattas, and soccer and lacrosse games. Once David and Jamie went to college, Coach Ford’s enthusiasm could even be witnessed in the basement of her sons’ dorms, where she could occasionally be found wearing ripped jeans and a flannel shirt while playing beer pong with her boys and their friends. Barrie’s life began a new chapter in 2003 when she and her husband separated after more than 30 years of marriage. While her passion for raising her boys never waned, she redirected her energy to her love of gardening, playing bridge with her close friends, and raising her last great love: her labradoodle, Cali. In addition, Barrie has focused her time on multiple charitable endeavors, including her generous support of Bryn Mawr Hospital, the Philadelphia Zoo, the Children’s Hospital of Philadelphia, the Squash and Education Alliance (as well as the SquashSmarts and SquashDrive programs), and The Haverford School along with her grandchildren’s other schools. Barrie had a wry, sarcastic wit, and relished in making others squirm as targets of her humor. She loved a good surprise party (throwing one, not receiving one). She decorated her house immaculately for Christmas every year, whether she had guests or not, and her basement was turned into a year-round wrapping station once her boys left home for good. The photo-shoot for her annual holiday card was of the utmost importance to her, resulting in tears every year, but the picture always turned out perfectly. She was incredibly generous and loved giving clothing in particular to the kids of young parents; nothing gave her more joy than seeing her grandchildren or friends’ children dressed in outfits she had gifted. Barrie was adored not just by her family, but also by her dear friends to whom she was a faithful confident, a merry prankster and a generous spirit. She continued to bring everyone laughter and good humor even as her health deteriorated. Above all else, Barrie was a loving mother, grandmother, sister, wife and friend to many, and she will be missed dearly. She is survived by her sister Lisa, her sons David and Jamie, her daughters-in-law Anne and Lauren, and her grandchildren Render, Jack, Evelyn, Hunter, Wiley and Lucy Jane. In lieu of flowers, please consider a donation to the Bryn Mawr Hospital: https://www.mainlinehealth.org/ways-to-give/bryn-mawr-hospital-foundation

Virginia Morrill Ford passed away peacefully in her home at the age of 75 on Thanksgiving evening, November 25, 2021. She died from complications related to a combination of lung and breast cancer, as well as chronic obstructive pulmonary disease... View Obituary & Service Information

The family of Virginia Morrill Ford created this Life Tributes page to make it easy to share your memories.

Virginia Morrill Ford passed away peacefully in her home at the...

Send flowers to the Ford family.