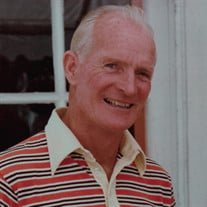 William Adamson Jr Athlete, Investor, and Car Collector William "Bill" Adamson Jr of Vero Beach Florida passed on February 7th, 2017 at his summer home of Waverly Heights in Gladwyne PA. Bill was born in January 31st, 1922 in Philadelphia to William and Amelia Adamson. He grew up Chestnut Hill with his identical twin brother Talbot before attending St Paul's School ('40) and then Princeton University ('44). After serving as an officer in the US Navy off the coast of California in WWII, he returned to Princeton where he worked at Bakelite Corp, a division of Union Carbide, as a mechanical engineer. He then started his own investment advising business which he maintained until his retirement in the early '80s. Upon retiring he moved to his long time winter home in Lake Wales Florida, living there twenty years before moving to Vero Beach in year 2000. An avid athlete, there was no sport that Bill did not like. He played multiple Varsity sports at St Paul's and then varsity lightweight football and baseball at Princeton where he held the single season stolen base record for many years until it was recently broken. He coached the lightweight football team from 1946-1952 and then continued to support the program as a fundraiser, advocate, and advisor for nearly 50 more years. Bill was also a passionate car buff who loved the challenge of finding and restoring classic cars. He collected cars not as an investment, but for their beauty to preserve them for “driving on the open road where they belonged not on display in museums”. His collection included many one-off cars, including a Mercedes Benz 540k with custom French body originally built for Adolf Hitler that was never delivered and hidden by the French for the entire war. Bill was married twice. His first marriage was with the late Ethel Ness from 1956-58. In 1961 he married Helen “Lenkie” Angier Keyser in 1961, a widow at the time with four children Leigh, Mac, Elizabeth (Liza), and Donald Keyser from her first marriage. Together they had one child, Peter Adamson and were married for 37 years. Bill is survived by his son Peter, grandchildren Colby and Amelia Adamson, step-children Leigh, Mac, & Don and identical twin brother, L. Talbot Adamson.

The family of William Adamson Jr. created this Life Tributes page to make it easy to share your memories.

Send flowers to the Adamson family.