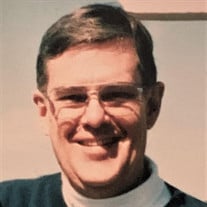 William D. M. Chew, Bill as he was known to friends, died at Bryn Mawr Village on Sunday, December 5th after a long battle with Alzheimer’s and a short battle with Leukemia. He was 87. Bill was a lifelong resident of the Main Line. He attended the Episcopal Academy and received a BA and an MBA from the Wharton School of the University of Pennsylvania. He worked in the Insurance industry in Philadelphia, as well as in Australia and New Zealand. Bill met his future wife, Kendall, at the College Dancing Assemblies, where they graced the ballroom floor. They were married 41 years, supporting each other’s careers throughout, before her death in 2001 from ALS. Bill was a member of the Merion Cricket Club where he bowled, played tennis, squash, and racquet ball. He is remembered for his sportsmanship and good humor. He was an avid collector of Lionel trains and Britain Soldiers, and a devoted classical music scholar, attending the Philadelphia Orchestra regularly. Throughout his life, Bill spent his summers at Brushwood, the family home in Jamestown, RI. A skilled sailor, he introduced his children and grandchildren to the beauty of Narragansett Bay. Bill was the proud father of Carol H. Chew (Richard Weigel) and William D. M. Chew, Jr. (Nicole Shalette), and dedicated grandfather of Kristen Weigel (Michael Booth), R. Kenton Weigel and Emily Weigel. He was pre-deceased by his parents, Richard S. Chew and Mary (Skip) Chew, as well as by his brother, Richard S. Chew, Jr. (Margaret D. Chew, deceased). BILL'S MEMORIAL SERVICE IS BEING RESCHEDULED. PLEASE REFER BACK TO www.chadwickmckinney.com FOR UPDATES. In lieu of flowers, donations may be made to the Alzheimer’s Association, 225 N. Michigan Avenue, Fl. 17, Chicago, IL 60601 or to the ALS Association, Greater Philadelphia Chapter, 321 Norristown Rd.#260, Ambler, PA 19002.

William D. M. Chew, Bill as he was known to friends, died at Bryn Mawr Village on Sunday, December 5th after a long battle with Alzheimer&#8217;s and a short battle with Leukemia. He was 87. Bill was a lifelong resident of the Main Line. He... View Obituary & Service Information

The family of William D.M. Chew created this Life Tributes page to make it easy to share your memories.

Send flowers to the Chew family.