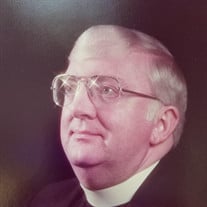 William Marquand deHeyman William M. deHeyman, 84, died on May 16, 2017. He was born on September 3, 1933, the son of Frank Grover and Luella Marquand deHeyman. Bill married Martha Ann Diana on June 4, 1960 at Emmanuel Lutheran Church in Manchester, Connecticut. He graduated from Adelphi Academy in Brooklyn, New York in 1951 and from Wagner College on Staten Island in 1955. Before entering seminary, he taught third grade at St. Paul’s Christian Day School in Floral Park, Long Island. In 1960 he received his Master of Divinity degree from the Lutheran Theological Seminary in Philadelphia. His first parish was King of Kings in New Windsor, New York; located about ten miles from West Point on the Hudson River. He developed and organized the church and became its first called pastor. Other parishes served were in Pennsylvania as pastor or in staff ministry positions. He served for nine years as Director of Public Relations and Media for the Southeastern Pennsylvania Synod of the Lutheran Church in America. He was part of the Synod’s extended staff. Pastor deHeyman retired in December 1995 and then was called to serve as interim pastor for two congregations. In June 2002, Pastor Bill was asked to serve on the staff of St. Thomas Episcopal Church in Whitemarsh, PA. It was there that he developed a Sunday worship experience called First Steps to Worship for very young children and their families. He served at St. Thomas for 15 years. In his youth, Bill was very involved in Luther League activities on the local, state, and national levels. He was convention manager for the National Youth Convention of the Luther League of America at Cornell University, Ithaca, New York in 1959. Bill served on the Board of Trustees of the Lutheran Home at Germantown and Silver Springs-Martin Luther School for 35 years. Bill and Martha were known for their hospitality, frequently planning parties and inviting friends and members from their various parishes into their home. Bill is survived by his wife Martha of 57 years and his two children; Elizabeth “Eli” Wiles and Deborah deHeyman and her husband Aitch Sedgwick; his granddaughter Brittney, and his sister Cynthia and her husband Louis. His Funeral Service will be held on Wed. May 24th at 3 PM in St. Thomas' Church, Whitemarsh. In lieu of flowers contributions may be made to Silver Springs-Martin Luther School, 512 W. Township Line Rd., Plymouth Meeting, PA 19462.

The family of Reverend William Marquand deHeyman created this Life Tributes page to make it easy to share your memories.

Send flowers to the deHeyman family.