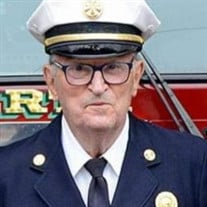 William J. Henderson “Bill” of Narberth, PA died on July 8th., 2021 at the age of 87. Beloved husband of the late Jane E. (nee Thomas) and devoted father of William R. (Nancy), Thomas (Denise) and Beth DiCicco; also survived by his cherished grandchildren, James, Jane, Maura, Daniel, Caitlin, Matthew, Julia and Maddie; sister, Nancy Anderson and nieces and nephews. Bill grew up in Wayne, PA and was a proud graduate of Radnor High School, which was something he always reminded his wife Jane and his kids (all proud Lower Merion High School graduates) when it was time for the Lower Merion/ Radnor football game each fall. Bill was a Staff Sergeant in the United States Marine Corp who served in Korea during the Korean War. After serving the United States of America in the Marine Corp, Bill went to Villanova University and graduated with a degree in Economics. Bill was big fan of basketball, especially the Villanova Wildcats. Bill loved his family and friends. Some of Bill’s happiest moments were at the house in Stevens Point, PA where he loved to have a cold drink with family and friends on the porch. Bill made any party a little livelier, whether he was making a joke or stirring the pot- you always knew when Bill arrived. Bill and Jane were huge supporters of anything their children and grandchildren did. They were fixtures at many football, lacrosse and basketball games and treated teammates like family. Bill was a devoted community servant who spent over 60 years as a firefighter. First with the Radnor Fire Company and then for 57 years with the Narberth Fire Company where he held many leadership positions. As Deputy Chief and Safety Officer, Bill always stressed training and firefighter safety. The firefighters were always a family to Bill and his teachings were always about their safety and protecting each other. The family will receive guests after 9:30 AM on Thurs. July 15th at St. Margaret's Church, 208 N. Narberth Ave., Narberth, PA, followed by his Funeral Mass at 11 AM. Int. Calvary Cemetery. In lieu of flowers, contributions may be made to either Narberth Fire Dept. or St. Margaret's Church.

The family of William J. Henderson created this Life Tributes page to make it easy to share your memories.

Send flowers to the Henderson family.