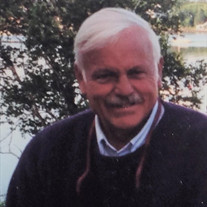 William Grant Van Pelt of Haverford, PA aged 86 passed away from complications of Parkinson’s at about noon on September 19, 2018. He lived most of his life as a resident of the the Main Line outside of Philadelphia, Pa having been born to Marian Grant Van Pelt and John L. Van Pelt in 1931 on Edgehill Road in Wayne Pa, the first born son, and fourth child after three older sisters, Jane(d), Ellen, and Marian aka Polly(d.). He attended Episcopal Academy, until he went to Groton Academy in 1944 from which he graduated in 1950. He continued on to graduate from Princeton in 1954 with a BA in history. In the early years of his young adulthood he married and taught his passion in history to young men at the Brooks School, in North Andover, Massachusetts. With a burgeoning young family and requisite three dogs, he returned to the Philadelphia area to begin a career as a market research analyst. An avid and accomplished sailor all his life he spent his earliest summers on Mount Desert in North East Harbor at his family’s beloved cottage, Delights. Once married he found it necessary to change alliances and became a regular summer vacationer in Blue Hill, Maine where his wife’s family had long summered. Marriages and occupations changed throughout his life, leading him to owning a house painting franchise in Barrington, Rhode Island and later a coffee/snack catering and vending business in Lancaster, PA. He was never without a dog, or several, and rarely without a camera. Once settled back in Berwyn, PA after Rhode Island, he reconnected with Saint David’s Church and joined the choir, became an alter person and eventually joined the vestry. The friends he made in these groups grew very dear to him, and he treasured these relationships for the rest of his life. Ever the historian, he enjoyed reminding his children that his great grandfather was the Reverend Peter Van Pelt of Christ Church in Philadelphia who served his flock during the Civil War. Moreover, in the later years of his life he encouraged the research that led to learning that his earliest ancestor to settle in the US may have been Tunis Van Pelt, a farmer of Staten Island, who settled in New Amsterdam around 1638. He used to always like to say that you could follow the Van Pelt family history from Staten Island through the cemeteries of New Jersey from north to south because there is a member of the Van Pelt family buried in every one. William is survived by his sister Ellen Wells, brother John C, children Alida Van Pelt, Ellen Jordan, William Van Pelt Jr., step children John Royer, Alison Royer Koch, Theodore Royer, and five grandchildren, and myriad step-grandchildren. His Memorial Service will be at St David’s Episcopal Church, 763 S. Valley Forge Rd., Wayne Pa 19087 on Saturday October 20, 2018 at 11:00 am. In lieu of flowers contributions can be given to the Saint David’s Episcopal Church Yard Tree Fund.

William Grant Van Pelt of Haverford, PA aged 86 passed away from complications of Parkinson&#8217;s at about noon on September 19, 2018. He lived most of his life as a resident of the the Main Line outside of Philadelphia, Pa having been... View Obituary & Service Information

The family of William G. Van Pelt created this Life Tributes page to make it easy to share your memories.