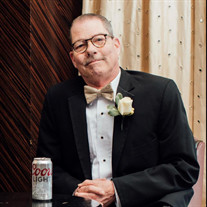 William “Wink” Paul Herron, Jr., of Wayne, PA, died suddenly on May 8th, 2021 at the age of 66. He was born on March 20th, 1955 in Philadelphia, PA to the late William and Paula Herron. He is survived by his wife of 36 years Ann (Muir) Herron, his three children Emily, Eliza Leister (Nicholas) and Liam. His 4 siblings Chris (Susan) Herron, Kenny (Angela) Herron, Hillary (Budge) Mallory, Margo Herron (Kurt Rumsfeld) and many nieces and nephews. Wink graduated from Haverford High School in 1974. He has spent the last 33 years working for Garman Graphics as a graphic designer. Wink’s greatest joys were his family, cooking, reading, the Ocean City Beach, his garden and Radnor Wayne Little League. Wink relished any opportunity to be with his family; prepare a home cooked meal and listen to his kids’ stories of the day. If he wasn’t in the kitchen, he could be found in the garden cultivating his herbs, weeding or adding beauty to his yard. Wink’s passion was sports, but baseball was his greatest affection. Radnor Wayne Little League has been the recipient of his coaching for over 20 years. Not only did he coach Little League he also ran the Challenger baseball (a program for folks with disabilities) for 10 years. Summer always drew Wink and his family to the Ocean City Beach. As a child, Wink spent his summers on the beach, developing an appreciation for the ocean, that he passed on to his own children. He was the first one on the beach with a book in hand. Wink’s friendships ran deep and wide, to this day his Haverford High School “committee members” remained close, gathering annually for Turkey Bowl for over 50 years. Wink looked forward this event every year. Wink will always be remembered for his quiet ways and his love for the “little things in life.” A celebration of Wink’s life will be held Thursday, May 13th, 2021 11:00am at 415 Boxwood Rd. Bryn Mawr, 19010. The celebration of Life and reception will be held outdoors. In lieu of flowers please consider a donation in Wink’s name to the Margaret E. Moul Home, 2050 Barley Rd. York, PA 17408

Send flowers to the Herron family.